Tai Chi Chuan is most often referred to as an internal martial art, indicating the emphasis is placed on strengthening the mind, circulating the Chi or vitality, and relaxing the body so that it is free to move. Tai Chi Chuan is most often translated as “Grand Ultimate System” or “Supreme Ultimate Fist.” It is also a complete system of physics and philosophy with many martial applications and is best characterized by the very popular symbol known as the Yin Yang.

The Yin Yang symbol consists of two semicircles: dark (Yin) and light (Yang). Both make a complete circle as they constantly merge into each other, symbolizing the spirit of “moving harmony.” This harmony of motion succinctly describes the laws of Yin and Yang which assert that in the phenomenal world (both physical and energetic) all existence is a relationship between complimentary but opposing pairs. This can be observed daily in the relationship between night/day, winter/summer, female/male, negative/positive, and countless others. In this system, Yang represents all that is expressive, productive, and strength-oriented. Its opposite Yin, is receptive, yielding, and internal. 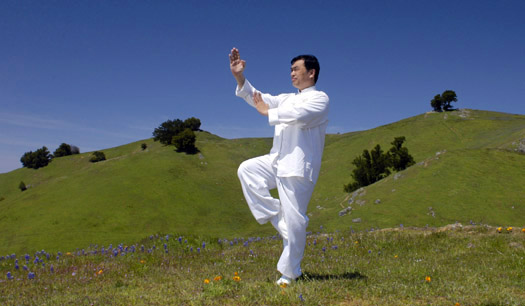 In the martial aspect of Tai Chi, the relationship between the yielding force of Yin and the unbending force of Yang forms the core of the fighting technique. The yielding force is used to avoid or redirect an opponent’s attack, while the unbending force is used to counterattack. This change from yielding to unbending is achieved in the form of a circle, therefore, the main pattern of Tai Chi Chuan is like many circles spiraling continually without end. In application, these principles lead to a force which Tai Chi master Ching Man Ching once described as “repelling 2,000 pounds with four ounces.”

“Tai Chi combines balance, flexibility, strength and aerobic exercises through slow, graceful movements. Each of these aspects of fitness contributes to overall health. Improved balance can minimize the risk of falling, while flexibility enables you to reach into the top cupboard. Good leg strength makes it easier to get up from a sitting position and strong lungs mean you can walk without getting winded.

While each of these aspects of fitness can be gained through other activities, Tai Chi is particularly well suited for older individuals because it is non-impact exercise.”

A recent study in the prestigious Journal of the American Medical Association found that Tai Chi can help improve the balance of the elderly and help reduce the risk of falling. In fact, in comparison to other exercises, including weight training, stretching, endurance training and balance training, Tai Chi was the most beneficial exercise, reducing falls and their resulting injuries 25%.