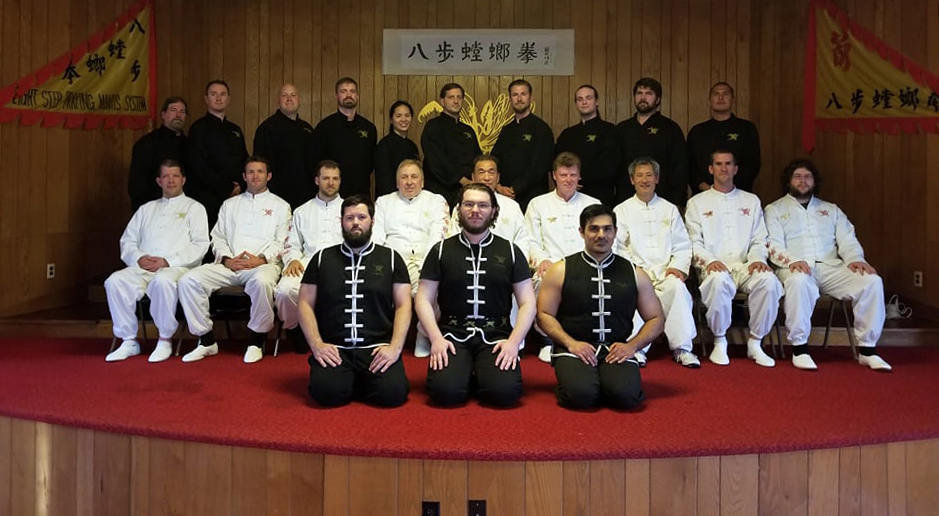 We began this year’s National Meeting in Vermillion, South Dakota by celebrating our 20th anniversary! Master Kevin Loftus, our gracious host, presented Grandmaster with a plaque to commemorate the event, as well as cupcakes for everyone to enjoy. Grandmaster, in turn, shared a bit of history and recognized individuals who had a major impact on the meetings over the years. The first meeting was held in 1998 at Master Jack Skutnik’s school in New Jersey. In a moment of genuine appreciation, Grandmaster thanked Master Kevin Loftus, Master Jack Skutnik, and Master Alan Nakamoto for never missing a single meeting. Such dedication is very moving.

After a grueling test that involved Grandmaster providing body adjustments, we now have three new Shifus: Shifu Amarante Garcia (New Mexico), Shifu Schuyler McCabe (New Mexico), and Shifu Ahmad Moghadam (San Francisco). It is a great achievement for them, their training partners, schools, and their Shifus!

I am always in awe and grateful that Grandmaster is so skilled in martial Eastern medicine – Abimoxi. The types of injuries, conditions and diseases he can help with are vast. One year, he drove my fever away, and gave me extra energy with just a couple needles. This year, he prescribed an herb for our daughter, Kalea, after seeing she had eczema on her skin. As mentioned above, he also adjusted a back injury so that the Shifu trainee could continue with his Shifu test within half an hour of treatment. What an immense impact Grandmaster has with his knowledge and experience.

Now for some fun! As with many of the previous ACMAF National Meetings, some of the most memorable aspects of this year’s meeting were the insightful seminars given by our Masters and Shifus. Master Kevin led off by teaching a seminar on sword Set #3 and sword usage. Shifu Andy Lengefeld first demonstrated single person Set #3. Then Master Kevin and Shifu Andy demonstrated the two person version of Set #3 together. Many of us had never seen a two person sword set before, and were struck by how connected the two were throughout the set.

Each of us then picked up a wooden sword and tried to learn the set. Especially when we started to try the two person set, it quickly became apparent that we needed to back up and learn how to wield the weapon first. Master Kevin gave us short exercises to practice our technique. He also demonstrated a lot of patience, as he watched many of us struggle with even some of the basic moves! Just trying to rotate the blade around the center was incredibly difficult. I also personally found it challenging to understand and visualize the connection between the swords and our typical weaponless two person sets. I have so much to learn! But, for now, on to the next seminar!

Imagine if you could force someone to follow those commands just by touching them with one finger…that’s what we learned to do in Shifu Nic Baker’s seminar. We focused on some pressure point and joint lock techniques taught in San Francisco’s Police Academy. When Shifu Nic was going through the Academy, the techniques looked very familiar to him, and for good reason – Grandmaster had taught the Academy’s instructors

decades ago! Today, the same techniques are still being used for crowd control and handling violent individuals on the streets of San Francisco.

Finally, Master Alan gave us tips for how to grab punches with more speed, power, and agility. Among other things, he showed us that if we keep our wrists straight, this gives us more options and control when leading into the next technique, such as a variety of joint locks. As with most of Master Alan’s lessons, the changes are subtle, and developing the right technique takes time, but the payoff is fundamentally huge.

After the seminars were over, for those who stuck around, we got to work on a variety of techniques. As Shifus, it is sometimes difficult to train consistently, as we did during the Shifu training program. So this was our chance to train! Some of us worked on Sang Ba throws, while others did some light sparring. As a special treat, Master Rich Myrvik taught us a throw he shows to people who might be hesitant about throwing.

All in all, this 20th anniversary meeting was a meaningful reminder that our federation is a great community of Eight Step Mantis enthusiasts. We have so much to share, not just in Kung Fu and Abimoxi, but also in our lives. I look forward to connecting again next year!